It was a wonderfully busy autumn (and tail end of summer) sharing the stories of the North American Martyrs and St. Kateri, and following their trail wherever I can find it.  As a synopsis, here is a gallery of photos. Enjoy the adventures, and pray with me to our beloved saints!

The North American Martyrs Mission Church is some distance off the main thoroughfares in Putnam Valley, near Peekskill, NY. Built in 1937, it is dedicated to our missionary martyrs. Pastor Emeritus, Msgr. Patrick Keenan, was most accommodating in allowing me to take photographs after Mass. I feel a “St Isaac Jogues Escape Tour – Part II” coming on! Watch for it next spring.

The church is designed as a longhouse of the Iroquois tribes. 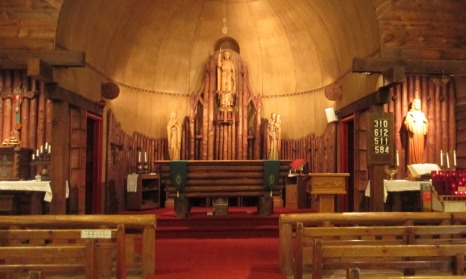 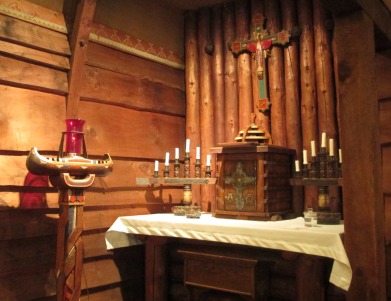 Tabernacle is richly rustic. miniature canoe, the transport of the missionaries and natives, holds the sanctuary light. 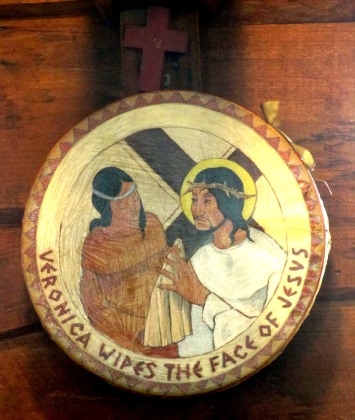 Iroquois people are depicted in the Stations of the Cross that are painted on drum heads.

Totem on the outside of the church. Note the turtle at the base — the symbol of St. Kateri’s clan. 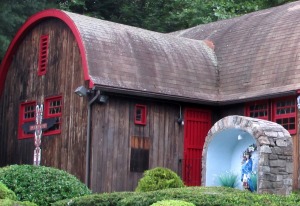 A stone shrine dedicated to St. Kateri is outside the church.

Heading east through Troy, NY, Route 2 becomes known as the Mohawk Trail, a trade route used by the Iroquois long before the Catholic missionaries set foot in the New World. Vestiges of their presence are everywhere—from the many gift shops along the way, to parks and camp grounds that bear their name. The pouring rain was a pleasure after a long hot summer. 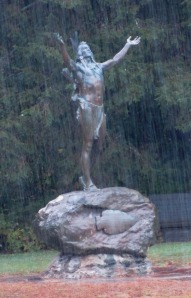 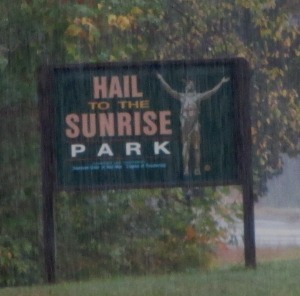 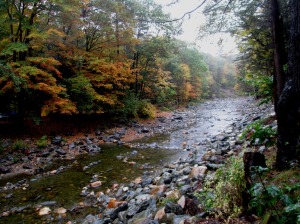 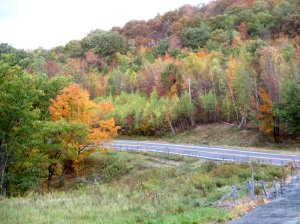 Back in the Mohawk Valley, there is exciting news from James Kelty, the producer/director of EWTN’s dramatic documentary of Saints Isaac Jogues and René Goupil, “Footprints in the Wilderness.” He visited the National Kateri Shrine in Fonda in September filming a new documentary on St. Kateri. “Footprints” is a significant part of my presentations about the martyrs, and I expect this new one will add a rich dimension to talks about our Lily of the Mohawks. 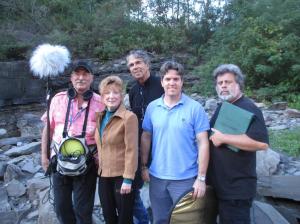 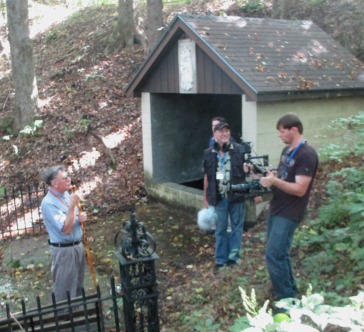 Friar Mark Steed (at left in blue), Director of the National Kateri Shrine, with film crew at the Kateri well. 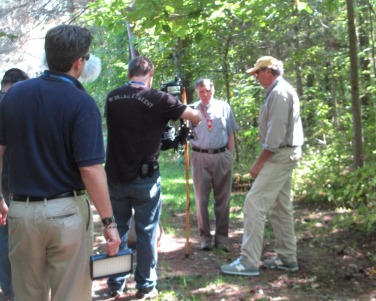 In the western reaches of the valley, I was invited to Our Lady Queen of Apostles to present St. Kateri and the Catholic faith. 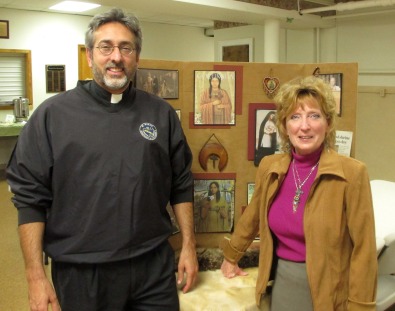 Beth with Father Paul Catena, pastor of Annunciation Church in Ilion (Beth’s home parish), and of Our Lady Queen of Apostles in Frankfort.

And in Utica, there was a follow up to a February luncheon talk on the eight North American Martyrs. This time, we focused on St. Isaac Jogues. It was wonderful to see familiar faces from Auriesville, Cooperstown, and from Carmel. 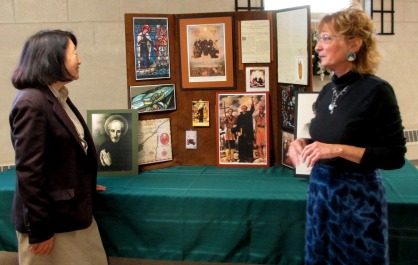 Beth talks with Arline Saiki of Edmeston at the Good New Center.

In a wonderful precedent set by Father Robert McGuire at the Auriesville Shrine in days gone by, Father Rendell Torres invited me to give a “mini retreat” at Our Lady of Hope Parish in the Adirondack community of Whitehall. It was held on October 18th, the vigil of the Feast of the North American Martyrs, and the anniversary of the death of St. Isaac. Set in the northern reaches of St. Isaac and St. Kateri’s treks to and from the Mohawk Valley, this retreat was my first opportunity to present the missionary martyr and his spiritual daughter in the same day. 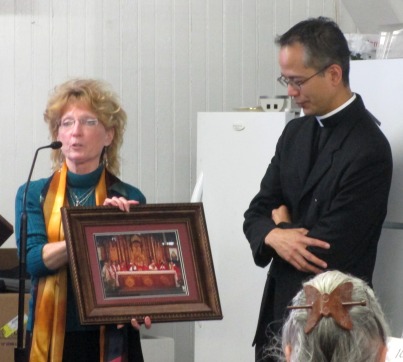 Beth presented Fr Torres with a memento of Auriesville – the Mass of the North American Martyrs that he concelebrated with several other priests in the Coliseum in 2011. 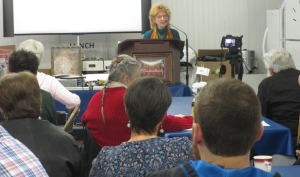 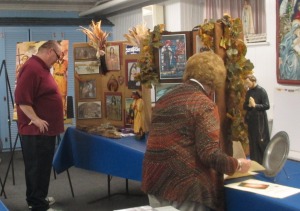 The mini retreat was in conjunction with, and attended by, the Marian Missionaries of Divine Mercy, a ministry of young men who give a year to works of mercy in action. Fr. Michael Gaitley, popular speaker and author from the Divine Mercy Shrine, is in charge of their formation. 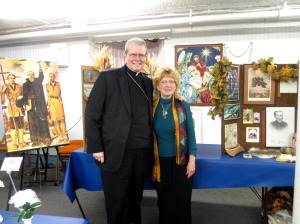 It was a thrill that Bishop Edward Scharfenberger was able to attend part of the retreat. He was the main celebrant for the Vigil Mass of the North American Martyrs with Father Torres as concelebrant, and Father Gaitley as concelebrant and homilist. We all agreed with Father Gaitley’s comment that the people of the Albany Diocese are blessed because “You have the best bishop in America!” Amen! 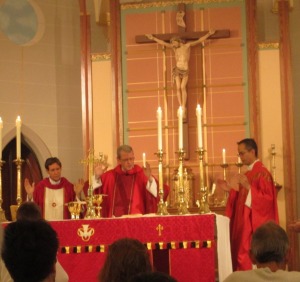 2 thoughts on “Travels with the Auriesville Saints”